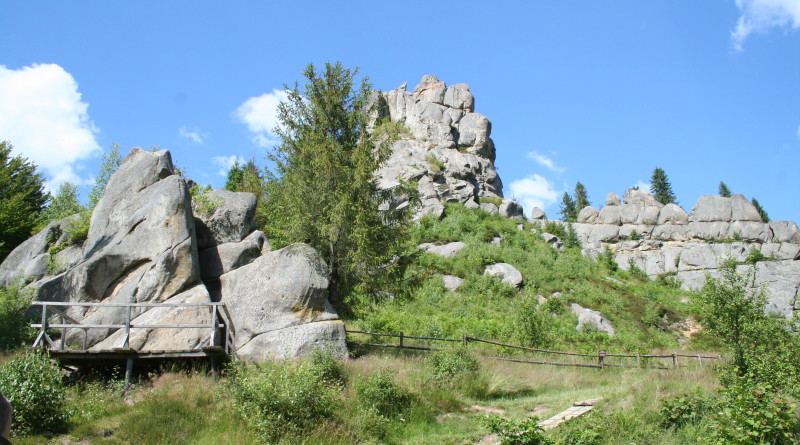 Tustan is old rock defense system of ancient Rus with customs and city – fortress, the remains of which are located in the Carpathian Mountains (Eastern Beskydy) Lviv region Skole district near the village Urych, near the town Borislav and the town Shidnytsya. Modern State Historical and Cultural Reserve “Tustan”is in Pidgorodtsivskiy forest. The picturesque sandstone complex of Urych includes: Stone, Sharp Stone, Little Rock, Zholob (Eagle). Over time, sandstone changed its original appearance, gaining amazing forms and artifacts – “ Four giants ”, ” Three fingers ”, “ Four spears ”, “ Eagle “, which follow the myths and legends. In some places sandstone stand in the form of powerful monolith. In the other – in the form of randomly generated blocks. There are many cracks, niches, caves, including man – made. In the I millenium BC on the rock group Kamin there operated pagan sanctuary tribal culture of frakiyskiy galshtat, who lived in our region in the Bronze Age ( their village was discovered near the village Pidgorodtsi ). On the rock “ Kamin ”, scientists discovered 270 petroglyphs. The most numerous are the solar symbols – symbols of pre – Christian God of the Sun. At the end of I millenium BC. E Thracians dissolved in Slavic ethnicities. Over four centuries on the rocks there was a mighty wooden dytynets ( castle ) Tustan. It was built by Bilohorvatski rich people. The central part of the fortification area of 3 Rectares was located on a rocky group “ Kamin ” of Yamnenski sandy rocks height of which was 40 m. Wooden buildings of Tustan existed from the second part of the IX to the middle of the XIII century. It was an important strategic point and was a part of a unified system of the the Carpathian ( Hungary ) defense lines of south – western borders of Kievan Rus and later Galicia – Volynia principality and that in old times was once a glorious city Tustan and was along with Lviv, Peremyshl, Korosne, Terebovl in the list of the most famous settlements in Galicia, as well as the customs point. This can be proved by Arab dirhams that were found in Tustan and were in circulation in the IX – XI centuries. In 1241, during the Mongol – Tatar invasion of Khan Baty Tustan was destroyed by invaders Tatars and there remained only village Tustan ( later v. Tustanovichi, and the modern part of Borislav ) and impregnable castle Tustan. Later, the fortress city Tustan is mentioned in chronicles of Krakiv historian Jan Dlugosha and Polish chronicler of Janko from Charnkiv according to which it guarded the southern border of Galician principality in 1340 and was captured by the Polish king Casimir the Great and he also ordered to rebuild it after the destruction. In the proclamation of Rome Pope Boniface IX on May 15, 1390 Tustan is mentioned as a barrier through which there was exported salt extracted in Drohobych and its suburbs. This documentary proves that Tustan besides the function of guard outpost, had the function of customs fortetsi on “ Salt ” path which passed from Drohobych in one straight direction through the village Tustanovichi, others through the villages: Hubychi, Borislav, Shidnytsya, Urych, Pidhorodtsi and then through Voritskiy pass to Transcarpathia in Hungary. Tustan since its seizure of Poles belonged to the state, that was royal. A royal charter to grant pp. Krushelnytsya on November, 4, 1395 shour that Tustan was also the administrative center of Tustan volost. Later Tustan becomes the property of the Polish magnates and gentry. Proof of this is the grant of royal charter in 1539, which gives the castle to M. Blitsynskiy. Blitsynskiy sell it in 1541. This patent also proves that Tustan was abandoned. In prescriptions M. Blitsynskiy and his heirs had to defend that castle, to restore, fix and maintain it in good condition using their own money. That fact, that Tustan fortress existed till the XVI c. is proved by some materials of research and archival documents, because the last known written mention of the castle belongs to 1565 in illustration of Drohobych salt zhupy where it is noticed that “… they take duties from merchants who go through the mountains, passing Drohobych. Rental fees were 14 zlotyh. Starting from the XVIII century numerous plantain tourists begin to attend the ruins of the castle – fortetsya Tustan. For them, local residents of surrounding villages create numerous transfers and legends about its history and decline. Sand in v. Urych is natural object that has a scientific, aesthetic, recreational, historical and cultural value. Now these sandstones are announced by the State Historical and Cultural Museum “ Tustan ”, which is annually visited by 3000 tourists. In Lviv in the XIX century engravings you can see the rocks of Tustan. Since IX century, they were visited by hundreds of thousands of people – soldiers, princes, nobles, plantain, tourists, scientists, professors, poets and writers government and public figures and other. Among them were: Danylo Galitskiy , Casimir the Great, Baltazar Haket, Ivan Vahylevych, Antin Byelovskiy, Antin Petrushevych, Cornelius Ustyganovych, Ivan Franko, Lesya Ukrainka and many other famous people. You can learn more by visiting Lviv NAO “Tustan ” http: // www. tustan. com ua